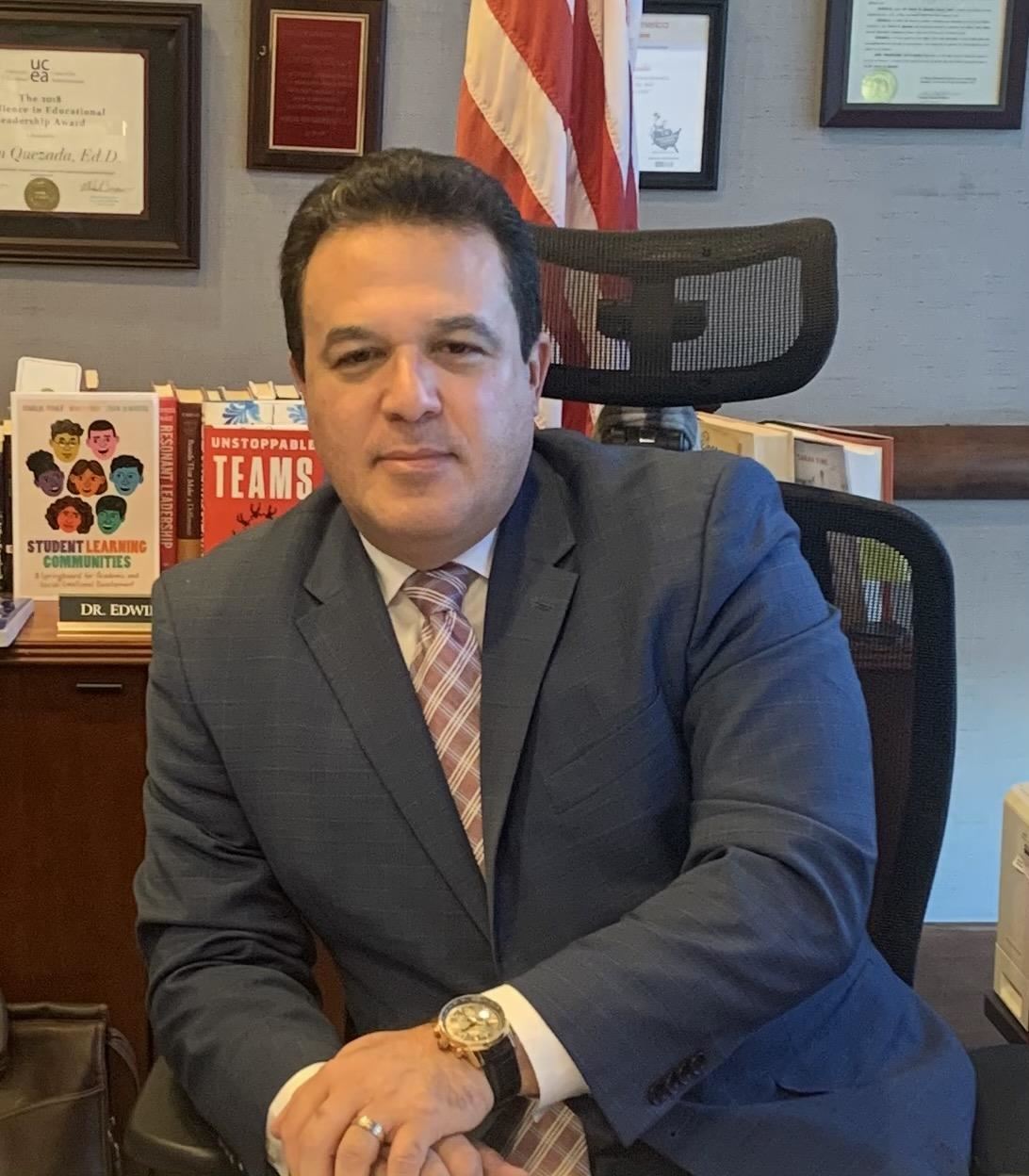 Dr. Quezada embodies the essential characteristics required of a successful educational leader – child-centered, intellect, financial acumen, passion, compassion, communication skills, and stamina. The Trustees of the Yonkers Board of Education appointed Dr. Quezada as Superintendent of Schools on March 16, 2016, after serving as Deputy Superintendent for two years.

Accolades abound for Yonkers My Brother’s Keeper (MBK) initiated by Dr. Quezada and launched in 2016 as part of the national and New York State movement. Recognized as a model for New York State, the MBK Challenge flourishes through a coalition with City of Yonkers Mayor Mike Spano and the Yonkers Public Schools. Yonkers MBK aims to close the opportunity gap for boys and young men of color through mentoring, academic preparedness, and emotional and social skill-building; 60 percent of Yonkers Public Schools students are of Latino descent. National organizations such as the Campaign for Black Male Achievement, the Executive’s Alliance to Expand Opportunities for Boys and Men of Color, and NBA Cares all recognize the work of Yonkers MBK.

An immigrant from the Dominican Republic, Dr. Quezada came to the Bronx, New York in September 1983 at 15 years of age. Completing most of his early education in the Dominican Republic, he graduated from James Monroe High School in 1985. He immediately began his college career at Herbert H. Lehman College, completing his Bachelor’s Degree in Accounting with a minor in Secondary Education in 1990. His education continued in 1995, earning a Master’s Degree in Counseling from Lehman College, a Master’s Degree in School Administration/District Supervision from Fordham University in 2000, and a Doctorate in Education from Walden University in 2012.

After only a year in accounting, Dr. Quezada followed his passion for education, then chose his alma mater in 1990 to begin his true life’s work in academia. He began teaching high school accounting and computer applications to students in the regular, bilingual, and special education programs. Due to his determination, hard work, and involvement in the school community, Dr. Quezada became the school’s Bilingual coordinator, where he was able to demonstrate his leadership skills. Because of his work with high-need students and their families, school counseling was the next logical career step on his career path, working at Columbus High School in the Bronx.

In January 1998, Dr. Quezada joined the Yonkers Public Schools as a Human Relations Facilitator. This position offered him a broad spectrum of opportunities to establish his leadership and counseling skills. Recognized as a mover and shaker, he was encouraged to obtain a degree in school administration. He was appointed assistant principal at Gorton High School in 2000, Principal of Emerson Middle in 2003, and Principal of Lincoln High School in 2004.

Dr. Quezada’s leadership embraces collegial collaboration, a commitment to the work, adherence to deadlines, and most importantly, the need for compassion and total focus on children’s academic success. Through his work at Lincoln High School, he honed his skills, collaboratively working with all stakeholders to construct a school where students are valued, respected, and encouraged to pursue college and their dreams. As a result, Lincoln High School received state and local recognition for improving student achievement during his tenure.

Following ten years as a principal, Dr. Quezada was promoted to Assistant Superintendent for Secondary Administration and Supervision. He worked collaboratively with the Superintendent of Schools to establish high-performing high schools.

Dr. Quezada’s doctoral study examined extensive research on the correlation between the use of student achievement data and effective instruction. In addition to his formal education, he participated in the Harvard University Principal’s Institute, the College Board Leadership Institute for Principals, and the Efficacy Institute training.

The New York State Education Department requested Dr. Quezada’s membership on the Principal Preparation Project Advisory Team that developed standards for building principals. He was also invited to serve on the New York State Board of Regents Blue Ribbon Committee of state, regional, and national experts tasked with improving educational outcomes for boys and young men of color. As a result of this work, New York was the first state to fund the My Brother’s Keeper initiative.

Dr. Quezada's awards and recognition include: